I have been asked to break down Villopoto’s technique and explain what I see that is the difference that makes him just that much better than the rest. To me, technique in anything you do should be the first thing on the list, not the bike or fitness. His technique allows so much speed, intensity and flow that he can pass other riders anytime he wants, change lines at a drop of a dime, save crashes where most would be sleeping. When he makes a mistake he is able to flow with it so he loses minimal time and continues forward.

The first ingredient to ride a motorcycle fast and smooth is your technique. Your speed and safety is only as good as your technique will allow. Once your speed is too fast for your technique to handle, you start making mistakes and bobbles, riding tight, being hesitant, and having crashes. This leads to injuries or your speed just flattens out because there have been too many near crashes and actual crashes. It is only natural that you get a little gun shy.

Ryan Villopoto puts all the weight and drive to the rear wheel, and is one with the bike. This means the upper body is relaxed because the lower body is controlling the motorcycle. From the hips to the head is going to the front end of the motorcycle and from the hips to the feet are going to the rear so you have a flow. He also has good posture on the bike so he can start off in the strongest, most stable, coordinated and efficient position. Start out in a good position end up in a good position, start out in a bad position end up in a bad position. Everything is in balance, never too much, and never too little.

Let’s dissect the five parts that make RV2 so effective!

If your knees go in front of your shoulders you are now in the worst, most dangerous position you can possibly be on a motorcycle. You have the highest point of the body, from the hips to the head, going backwards and away from the direction the bike is going. If your upper body is going backwards and the motorcycle is going forward, how much gas can you give it and how aggressive can you truly be?

The Hips - You have heard me talk about hips out before - well that is what Villopoto’s is doing. He is sitting or squatting in a functional way by squatting at the hips not at the knees. When you squat at the hips, your lower body is now going backwards toward the back end and back wheel. Alternatively, when you squat at the knees, the lower body going forward and the upper body going backwards. In that position you are doing the most dangerous thing you can do, put the upper body in the back of the bike. Now whatever happens back there is now happening to you!

When you have the hips out: 1- you are now in the most strong and most stable position

Now whatever the bike does, the highest point is not affected because the hips go left, right, up and down just like the rear end of the bike so that makes you one with the motorcycle.

Chest – RV2’s chest and back is straight standing or sitting. The better posture you have the better strength, stability, coordination and balance you will have. Remember start out in a bad position end up in a bad position so he is starting out in a good position so he ends up in a good position when things go wrong. When everything is smooth and the track is easy, technique is sometimes not as important. But what about when it's goes bad and the track is rough as hell?

Having a straight back will also bring the core into action, your arms and legs are attached to your core and your core stabilizes and coordinates your arms and legs. Your core reacts before your arms and legs react. When you round your back when braking, you put more weight onto your hands and arms so now you are in a pushing back position which will make your arms tight. When you round your back during acceleration, your weight is going backwards away from the direction the bike is going, that will put you in a pulling position. How much gas or how aggressive can you be if you are going backwards and the bike is going forwards?

Back straight, hips out, ready for anything, same as Villopoto. The more dynamic the sport is, the better posture you need to have and Motocross is the most dynamic sport on Earth.

Arms - To me, arms and elbows are not the most important because you should be doing all your controlling, stabilizing and flowing at the feet, core and hips. In the corners, if your elbow is lower than the bars or even same height, then there is a problem. If you are trying to control the bike with the arms, they are going to tense up. If your arms are tense you will exaggerate everything that front end is doing and you make every push of the bikes front wheel, every tuck, and any head shake even worse! If you are controlling the bike with your arms you now have to counterbalance the bike. The front end is always moving around so allow it, motocross is like dancing sometimes you have to follow and sometimes you have lead.

Villopoto’s upper body is fixed, straight and balanced and the bike is doing all the movement from the hips to the feet so the upper body stays still. In Villopoto’s position it allows his arms to be loose so he can allow the bike to do what it needs to do; come to him and go away from him, in braking bumps, whoops, corners and jumps.

Since the dawn of the era of 4-strokes two riders have dominated, Ricky Carmichael and Ryan Villopoto. There have been other riders to win championships but these two have dominated, on their toes, hips out, and back straight. RV has taken that to the next level by controlling the bike with his feet and a big emphasis of weight to the rear end. There must be something going on when there are 21 championships between these two. 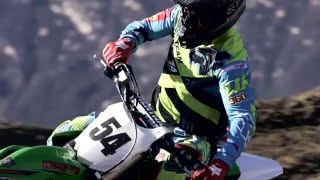 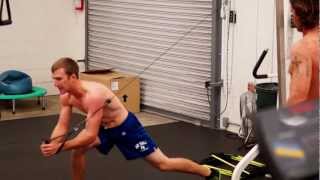 Why Eli Tomac is So Dominant

Ryan Hughes Welcomes You to the Ryno Institute 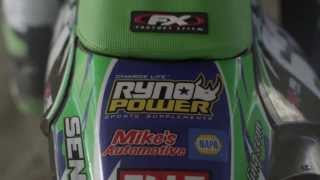 Time to shift to a better bread. Ryan Hughes and Food For Life Collaborate.

On Track How To: SX Whoops With Ryan Hughes

On Track How To: Seat Bounce With Ryan Hughes